I just returned from a wonderful ‘vacation’ at the Ohio State Fair.  My future in-laws show hogs at the state fair which happens to occur during their home county fair – not exactly an ideal situation.  So, I go and help out with the hogs and try to stay out of the way in Columbus while their father holds down the fort at the Wood County Fair.

My first day in Columbus I wandered the fairgrounds for awhile looking at the exhibits and resisting the fried food stands.  I was pleasantly surprised at the number of consumer education booths I kept encountering.  In almost every building I entered, there was a booth or display that provided consumers a first hand view at how Ohio produces a safe, wholesome food supply.  Take a look at what I found in the swine barn – there were four viewboxes set up to show fair-goer’s how hogs are cared for on a farm.

Under each flap was a picture of the equipment or in this case, some feedstuffs.

Moving on to the beef barn, I admired the putt-putt golf course.  My friend, Erin Limes Lampe, who is the Director of Programs and Industry Relations for the Ohio Beef Council, had set up a putt-putt course with beef production facts.  You could play on the course for $1 and at each hole there was a sign describing different production methods and phases.  This hole was about herd health. 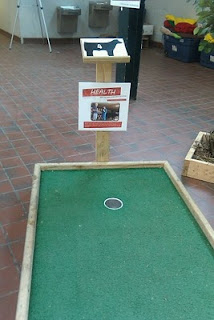 Erin told me that 4000 people play that putt-putt golf game every year.  If even 1/2 of those patrons were non-agricultural consumers, that is a superb achievement for the beef industry.  Erin has also developed a video to show consumers the story of beef production in Ohio. You can access this by clicking HERE.
My last stop was the Dairy Bar, where I admired the informational displays while waiting on my delicious strawberry sundae.

I think it’s great that consumers can see who produces their food and how it is done.  In addition to the above displays, the Ohio State University College of Veterinary Medicine had set up a booth that allowed patrons to milk a cow and admire the animals in the petting zoo while a moderator explained how producers provide basic health care to their animals.
I think that Ohio does an amazing job of educating consumers on how their food is produced.  Almost every agricultural entity has a form of media to communicate to consumers how agriculture is embedded in everyone’s lives.  By setting up displays and booths at their state fair, Ohio agriculturalists have been able to educate a largely urban population about what goes on in the food industry.  I give Ohio an A+ and can only hope that other states will follow suit.